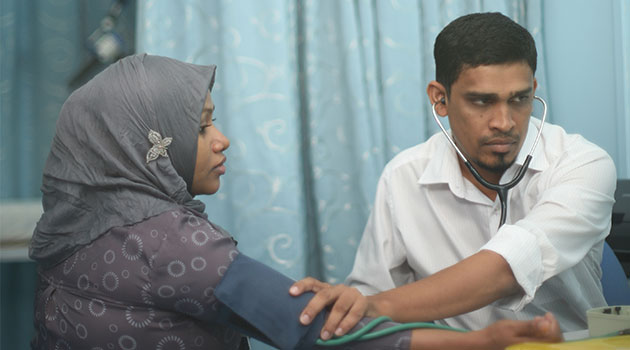 An overview of AMDC’s Operational Activities

AMDC operated a medical centre with a laboratory, pharmacy and some diagnostic facilities such as Ultrasound Scan, ECG etc, at Laamu Gam Thundi from 1997 to 2001, at a time when there was no other medical services available at that region. The clinic team included a doctor, midwife/ nurse, a laboratory technician and a pharmacist. The clinic undoubtedly helped a great deal in enhancing the medical services available in the region and was able to organize visits by our medical team to the nearby inhabited island as a mobile clinic. The clinic was discontinued when the Government upgraded the health facilities in Gam and the demand for the private healthcare declined.

A medical centre equipped with a hyperbaric chamber at Bandos Island Resort was operated by AMDC until 1994 / 1995.

AMDC was the first private clinic to offer Laboratory services and diagnostic services such as ECG, Ultrasound Scanning and Lung-function tests, and X-ray services from a single centre in the country.

AMDC has two pharmacies; one infront of our Main Clinic in Maafannu and another one in Henveiru

AMDC had operated an emergency/first aid response clinic at Velanaa International Airport from 15 June 2011 to 30 April 2017.
The airport pharmacy was also run by AMDC during this period.

AMDC opened a new centre specially dedicated to our Physiotherapy and Dental Department, conveniently located right across the road from our main building.